Rachel’s Network and Ashoka — the world’s largest network of social entrepreneurs — joined forces in 2014 to uncover environmental innovation and promote women who are pioneering sustainable change. We are proud to announce the second Ashoka Fellow sponsored by Rachel’s Network: Angelou Ezeilo.

Through her organization, the Greening Youth Foundation (GYF), Angelou is working to change the face of conservation in the United States and help young people of color find meaningful careers in conservation.

As America’s demographics change, the environmental movement must change with them. GYF promotes a new paradigm of ‘sustainable diversity’ whereby communities of color become the backbone of the next conservation workforce and the source of its leadership.

GYF’s signature program is its Youth Conservation Corps which has worked with hundreds of young people from 17-25 and placed more than 750 in conservation internships across the country. Participants in its Urban Youth Corps program are trained in light construction, conservation, agriculture, forestry, trail restoration, leave-no-trace methods, teamwork, financial literacy, job interviewing, and more.

After each training program, it is GYF’s goal to place participants with GYF partner organizations around the country. Job placements take a variety of forms, and have included everything from restoring shotgun homes in Atlanta’s Martin Luther King historic district, to retrofitting National Park structures in Colorado. 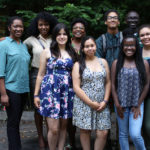 For Angelou, diversifying the pipeline to public land management and other environmental careers is a step toward a broader culture shift where the country begins to think differently about who can and should enjoy our public lands, experience the joys of outdoor recreation, and take responsibility and leadership for stewarding our precious shared resources.

Greening Youth Foundation’s budget in 2016 was $2 million. Its programs are funded by the federal government, foundations, and a handful of private corporations. Over the next several years, Angelou plans to work more closely with the billion-dollar outdoor recreation industry with the belief that they too have a vested interest in reaching a new talent pool and engaging more diverse communities.

Growing women’s leadership in the environmental community is at the heart of Rachel’s Network’s mission. By supporting Angelou’s work for the next three years through this fellowship, we’re investing in her vision for the future of the movement.

“Angelou exemplifies a needed positive approach to broadening the education and concern of both a younger and more diverse generation of future leaders for the aging environmental movement,” said Rachel’s Network Founder Winsome McIntosh.