In October 2013, Rachel’s Network members took a special excursion during our Fall Retreat to Bracken Cave, which at the height of summer houses approximately 15 million Mexican free-tailed bats, the largest concentration of mammals in the world.

As the sun began to set, the bats made their spectacular emergence from the cave into the twilit sky, and members watched in awe for over an hour.  The incredible natural spectacle was truly an experience of a lifetime.

Each night from March until November, Bracken’s bats—the world’s largest gathering of mammals—stream out of the cave at tree-top level, taking three to four hours to empty the cave. And almost every night, their path takes them over the Galo tract. 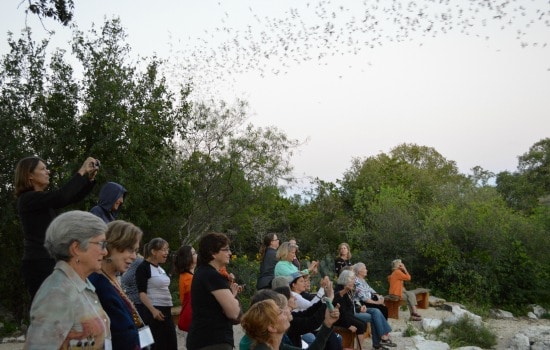 BCI Bracken Cave Preserve Manager Fran Hutchins learned in January 2013 that owners of the Galo tract, Galo Properties, were planning to build a 3,500-house subdivision on the site. For BCI, it posed a challenge like no other in its history.

Free-tails love buildings and will congregate around street and porch lights catching moths. “The houses would have been a magnet for bats seeking new roosts, learning to fly, hunting insects or wanting a drink from a swimming pool,” Fran said.

BCI knew that placing 10,000 people under 15 million bats was sure to lead to trouble. A child playing with a young bat found in a yard or brought into a house by a cat or dog would have to get rabies shots. Resentment and fear in the community would likely lead to calls to remove the bats.

Under Texas state law, local jurisdictions had little authority to deny or alter development plans that did not violate zoning. In the quiet ranchland corner of Comal County where Bracken and the Galo tracts are located, there is no zoning.

So BCI turned to its members. In just three weeks, more than 20,000 people signed a petition urging protection of Bracken Cave as a site of global importance and packed a May 2013 San Antonio City Council public forum.

Other organizations began to help, including Taking Care of Texas, a conservation group founded by former First Lady Laura Bush; the Greater Edwards Aquifer Alliance; and the Texas chapter of The Nature Conservancy (TNC). The New York Times and National Public Radio covered the story, along with regional and local outlets.

Meanwhile, The Nature Conservancy and BCI began meeting quietly with representatives of Galo Properties to try and acquire the 1,521-acre property. With pressure and support from partners, including the city of San Antonio, they were finally able to buy the land in the summer of 2014 for $20.5 million.

As co-owners, BCI and TNC are now working together to manage the land. They’re removing junipers and other brush for controlled burns, benefiting the federally endangered golden-cheeked warbler and enhancing the insect population on which Bracken’s juvenile bats depend.

In the future, BCI is looking to build an interpretive visitor pavilion near the cave to accommodate the thousands of BCI Members, school and church groups, families and individuals who come to watch wildlife on the site.

The story of how BCI, TNC and countless others worked together to save Bracken Cave is so inspiring,” said Susan Wallace, a board member of both BCI and Rachel’s Network. “Smart and visionary collaboration can achieve big wins for wildlife and habitats. The saving of Bracken Cave and its bats exemplifies that.”