Reposted from Marianne Gabel’s op-ed in the Delaware Gazette

The temperature on Capitol Hill on June 23 was in the mid-90s, and humid. Four Delaware, Ohio members of Citizens Climate Lobby (CCL), including myself, were among 800 CCL volunteers walking the Hill that day to create “Political Will for a Livable World” and to make our Ohio voices heard.

Our group — Sheila Fox, Alice Frazier, Lindsey Kohlenberg and me — and other Ohio volunteers met with aides in the offices of 16 out of Ohio’s 18-member Senate and House delegation. And when the dust settled, the exhausted CCL volunteers in Washington — some there from Alaska and Hawaii — had met with more than 500 congressional offices to press for climate action.

“Even though we were well informed about the risks of the changing climate and eager to talk about a solution for Congress to address it, we were not paid corporate lobbyists, so yes, we were anxious,” said Sheila Fox. “But the conversations were cordial, respectful and informative for both sides. The aides were generous and gracious with their time. We all listened to each other.”

So what did we talk about? We came as non-partisans, prepared with a policy that can grow the economy, add jobs, increase our competitiveness with China, and make our air and water cleaner. What is the policy? A gradually rising fee on carbon as it comes out of the mine or well-head, with all the revenue returned to households. We shared the results of a non-partisan study that found such a policy would cut CO2 emissions in half within 20 years, while adding 2.8 million jobs to the economy and saving 13,000 lives annually because of reduced air pollution.

“Our voices were heard. The aides we spoke to seemed to find the policy intriguing and welcomed suggestions for learning more,” Alice Frazier said. “Of course we have followed up on those requests. We left thank-you notes and we hope to continue the connections.” 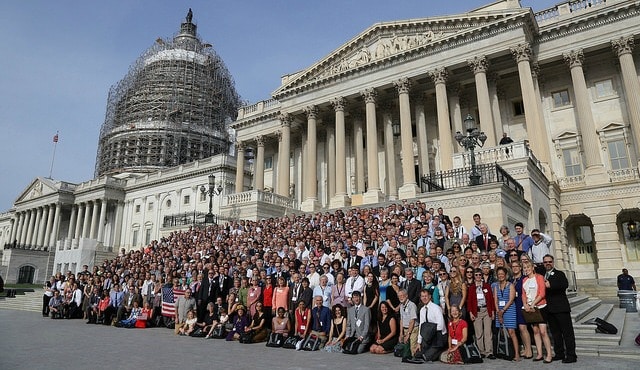 In the Republican offices, where some dispute might have been expected, debate about climate change did not come up. The tacit agreement seemed to be, “Let’s not argue about the science; let’s talk about solutions.” A major concern seemed to be the well-being of the member’s district.

We found that the aides were actively listening to our message that the “carbon fee and dividend” would be simple, market-based and predictable for businesses’ long-range planning, and would ease the effect of higher energy prices on households.

“A big benefit in these days of congressional gridlock is that the revenue goes back to households, so those funds are not on the table,” Lindsey Kohlenburg pointed out. “Neither party can get it for their purposes, and long fights over party priorities won’t happen.”

Also of appeal to Republican offices, the “CF&D” solution we described would not involve bigger government and more regulations. It would leave it up to the market to determine which technologies would win and which would lose, giving incentives to power companies to invest in cleaner sources, businesses to be more efficient, and consumers to shop around for cleaner, cheaper power and free up their monthly dividends for other purchases.

Here’s what we know about climate change: 97 percent of climate scientists are convinced, based upon the evidence, that human-caused global warming is happening. When they see no solution, people just don’t want to think about it. But when an effective solution is possible, opinions change quickly. Through respectful discussions based on common values, Citizens Climate Lobby hopes to help Congress find the way to a cooler, livable world.

Rachel’s Network Member Marianne Gabel grew up in the Rust Belt, west of Philadelphia, and after college worked as a journalist for the Philadelphia Bulletin. For years, she practiced law and worked as an advocate for children in disputed custody cases. A lifelong environmentalist, Marianne started the Delaware, Ohio chapter of Citizens Climate Lobby in 2014.