Conservation Success in the Congo Basin

Rainforest Trust supports passionate conservation partners around the world who dedicate their lives to protecting threatened species and the habitats that are their homes. Two inspiring partners are Terese and John Hart, who work in the Democratic Republic of the Congo (DRC) and who, with support from Rainforest Trust, played a key role in the recent declaration of the new Lomami National Park.

Ever since taking a college anthropology course in the 1970s, Terese and John Hart have been fascinated by the forests and wildlife of the DRC. After graduation, they both traveled to the central African country – Terese to teach and John to learn about the region’s animals and tribes. Over the next few decades, the Harts raised their three daughters in both the US and the Congo, traveling back and forth to conduct research and support conservation efforts in the DRC. 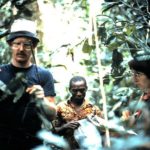 In 2006, the Harts joined the Lukuru Wildlife Research Foundation to help survey the massive forested region surrounding the Lomami River in central DRC, as no one had ever extensively studied that area. The survey confirmed the presence of Okapis (herbivores the size of horses with zebra-like markings on their legs), found Bonobos in locations thought to be uninhabited by the apes and documented the Lesula monkey, a species of primate that was previously unknown to the science community though familiar to local residents. The survey team also saw the extent of the bush meat trade and how, when paired with unregulated hunting, it drastically impacted wildlife.

Hunting of threatened species like Bonobos, Forest Elephants, and Okapis used to be minimal; in some areas killing them was forbidden, and the capture success rate was low with hunting tools like nets. However, with the country’s recent wars, two prominent forces were introduced that raised the animals’ vulnerability: outsiders with little concern for local taboos and accessible military-grade weapons.

To combat this onslaught, the Lukuru team developed a conservation model that engaged communities while monitoring animal populations and hunting pressures. These efforts led the team to approach local communities about the creation of a national park.

One female chief of a local tribe advised them that the most successful method to create a park would be through a tambiko ceremony, which brings together traditional authorities, including ancestors from the past who are consulted through rituals. There were also discussions among the provincial authorities, village chiefs, government agents and Lukuru team regarding the park borders and forest usage.

“The birth of a park in the minds of the people and the changing traditions of a place are not a single series of signatures,” Terese explained. “It is many village meetings; it is discussion, negotiation, scratches in the bark of trees, song and spit in the sand.”

Once the local leaders — and through them, the ancestors — agreed to support the creation of the nearly 2.2 million-acre Lomami National Park, it was then approved by government agencies and the president, and finally signed into existence by the prime minister on July 7, 2016. This was the first national park in the Congo, and one of the few in Africa, established with major support from local communities.

“The declaration of Lomami National Park is coming at a crucial time as threats to its spectacular rainforests are rapidly accelerating,” said Rainforest Trust CEO, Dr. Paul Salaman.

Lukuru Wildlife Research Foundation and partner Rainforest Trust are currently working to create the Balanga Forest Reserve beside Lomami National Park, which together will protect nearly 3.4 million acres – an area almost as large as Connecticut – to form a massive refuge for Okapis, Forest Elephants and Bonobos.

The success of the Lomami National Park and continued protection through the proposed Balanga Forest Reserve are a reminder of what can be accomplished when tradition, authority and determination unite to conserve nature in the Congo Basin.

Rainforest Trust, a US-based nonprofit which has helped protect more than 15 million acres in over 20 countries, is working with the Harts to help create the Balanga Forest Reserve. To learn more, visit the Rainforest Trust website.