On the cusp of the 100th anniversary of the National Park Service, there’s no better place to explore the future of conservation than the world’s first national park: Yellowstone.

In October, Rachel’s Network members and guests travelled to this iconic landmark for our 2015 Fall Retreat. In addition to visiting some of Yellowstone’s most dynamic landscapes, we heard from top experts in wildlife conservation, park management, climate change, and sustainable ranching.

Yellowstone National Park Superintendent Dan Wenk opened the meeting by summarizing the current state of the Park, which celebrates its 144th anniversary in 2016. He stressed a fact that was repeated often throughout the trip: Yellowstone lies at the core of the largest intact temperate ecosystem in the world.

Even so, “wildlife don’t respect federal boundaries,” he said. Many of the challenges the park faces have to do with managing park-state borders with Wyoming, Montana, and Idaho; and working with people outside the park to ensure safe wildlife habitat – or at least do as little harm as possible.

The impending removal of the grizzly bear from the Endangered Species Act, native fish conservation, bison management (bison carry a disease that has the potential to infect cattle), collaboration with states on the appropriate number of licenses for wolf hunters outside park borders, and handling the drastic increase in Park visitors are issues that Dan and Park staff regularly grapple with.

The Park is also facing $1.5 billion in deferred maintenance costs on infrastructure like buildings, roads, and trails. Considering Yellowstone is larger than Rhode Island and Delaware put together, NPS staff has their work cut out for them. “If we degrade this resource, we will degrade the reason people want to come here,” Dan said.

The following day, Rachel’s Network explored the Norris Geyser Basin to witness another feature that makes Yellowstone so unique: its hydrothermic activity. As the Park contains the remnants of a supervolcano, the land here is scattered with 10,000 hot springs, mudpots, fumeroles and geysers emitting minerals and gases from the depths of the earth. 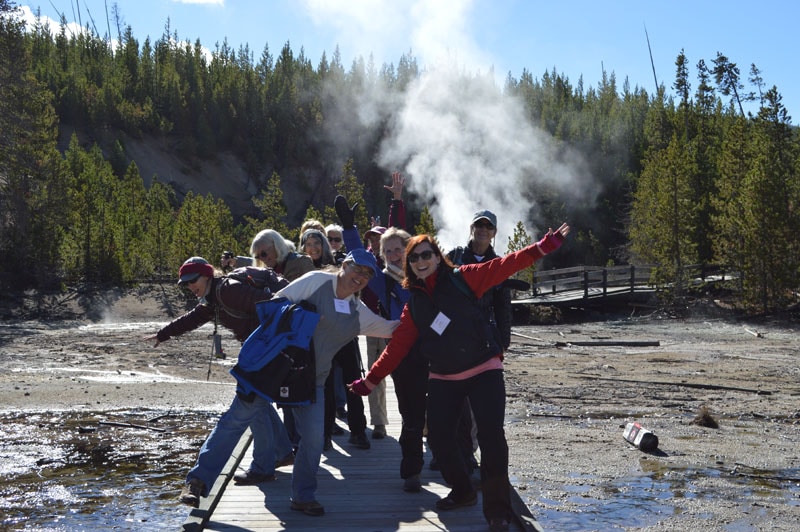 Yellowstone Association instructors led us through an extensive network of boardwalks among steaming, hissing hotsprings and the world’s largest geyser: Steamboat Geyser.

Prefacing the next day’s trip to wildlife watch in Lamar Valley, renowned biologist Doug Smith shared his work on perhaps the Park’s most famous animal: the gray wolf.

Restored to the Park in 1994, Yellowstone’s wolf population now comprises 11 packs and roughly 400 individuals in the greater Yellowstone ecosystem. “This is a conservation success story,” said Doug, who was there from the beginning and now leads the Yellowstone Gray Wolf Restoration Project. Not without its critics outside the Park, the reintroduction is a perfect illustration of the tricky balance between human desires and wildlife protection.

“Wolves are the antithesis of human civilization,” Doug said. “Can we allow them to continue to exist? For thousands of years we said ‘no’… but that cultural norm doesn’t do us any good anymore.”

A few lucky members spotted wolves and bears the following morning while visiting Lamar Valley, Yellowstone’s prime spot for predator-watching. Poised with spotting scopes and binoculars, we patiently scanned sagebrush steppe for signs of movement. Large herds (technically “obstanincies”) of bison grazed the valley, while pronghorn and mule deer peeked at their human visitors from the roadside.

Sculptor and ecologist George Bumann helped us reflect on this special experience later that evening. As he spoke of his own transcendent encounters with wildlife in the Park, he brought a wolf to life before us using only his words, his hands, and clay. Members and guests were transfixed by his stories and came away from the presentation with an even greater reverence for nature.

Preserving land for wildlife is a significant challenge by itself, but it pales in comparison to the threat global warming poses to our national parks. “[Climate change] could be an ecological disaster for Yellowstone,” said the Park’s climate specialist Ann Rodman, who shared the latest research on climate impacts in the Park, projections for the future, and how officials are responding.

Because of climate change, Yellowstone is losing its cold days and snowpack, increasing its growing season, and seeing more wildfires. This is leading to many ripple effects on the Park’s flora and fauna, most of which are difficult to forecast.

“We have no way to predict how these things will play out on the landscape with changes this fast,” said Ann. As greenhouse gas emissions show no sign of slowing, these unpredictable impacts will grow in severity in the decades ahead. 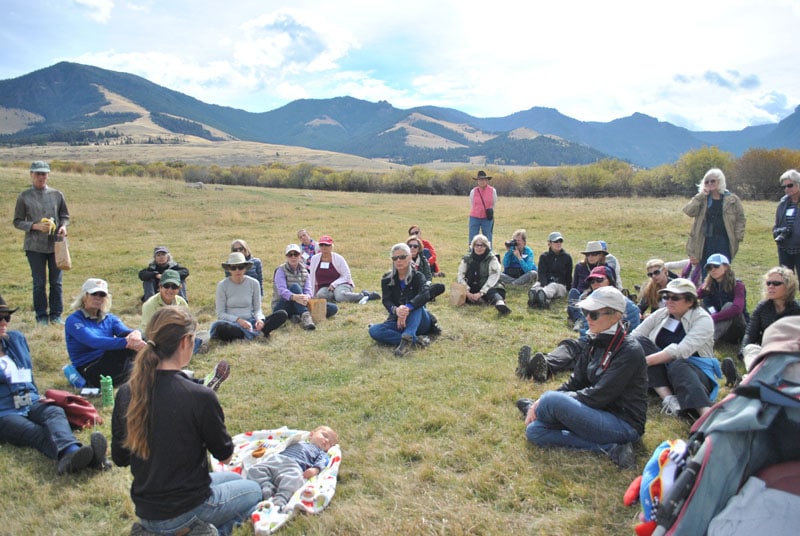 Hilary Anderson talks about her wildlife-friendly ranch in Montana

In this new reality, national parks have an important role to play, both as sites of adaptation research and as proving grounds for educating the public on climate change. Guides like those at Yellowstone have the potential to engage millions of visitors every year on this colossal challenge and how people can take action.

Before concluding our journey, Rachel’s Network travelled north of the Park to Paradise Valley, Montana to see what a healthy human-wildlife dynamic looks like on the ground.

Cattle rancher and wildlife biologist Hilary Anderson has adopted practices that allow her to ranch successfully alongside wolves and bears. By keeping her cattle in close proximity to each other through ingenious herding methods and portable electric fencing, and by intimately knowing the land, Hilary is pioneering a model of coexistence that is catching on with a younger generation of rancher.

Erin Edge, Rockies and Plains Representative at Defenders of Wildlife and Caroline Byrd, Director of the Greater Yellowstone Coalition are supporting progressive ranching methods like Hilary’s throughout the Yellowstone ecosystem. They spoke with us about the ways they’re collaborating with ranchers to protect wildlife and preserve livelihoods. Defenders of Wildlife CEO and Rachel’s Network Liaison Jamie Rappaport Clark also joined us to offer a national perspective on work happening locally and her organization’s efforts to protect the Endangered Species Act.

While walking Hilary’s beautiful ranch, Rachel’s Network members and guests could see the future of conservation: a place where humans thrive having repaired their relationship with the landscape and wildlife.