Lake Tahoe Does Citizen Science with the Pipe Keepers

Last month, a pair of storms delivered over six inches of rain to Lake Tahoe, nearly double the average October rainfall. Overall, the storms dropped 11 billion gallons of water on the lake.

While most Tahoe locals enjoyed the rare October rains by hiding indoors with a hot cup of coffee, Nick Rury rushed out to Tahoe’s South Shore, as he does every time it rains. Gathering up his gloves, a small cooler, sample bottles, and a bag to collect trash, Nick descended a steep set of crumbling stairs to collect samples from a stormwater pipe draining a neighborhood around South Lake Tahoe’s Fremont Avenue. The pipe, around a foot in diameter, juts out nearly a dozen feet from the steep hillside, pouring a jet of stormwater onto the beach and into Lake Tahoe.

Nick is a Pipe Keeper. The League to Save Lake Tahoe started the Pipe Keepers program in 2012. Through this citizen science program, League staff train community members like Nick to monitor stormwater pipes around Lake Tahoe and record observations of the surrounding watershed.

In the past year, Pipe Keeper volunteers collected nearly 400 stormwater samples. They deliver each sample they collect to the League’s office, where staff analyze the samples for turbidity, a measure of the cloudiness of the water.

Why all the fuss about bad weather? Scientists have found that the leading threat to Lake Tahoe’s clarity is pollution in stormwater runoff from the Tahoe Basin’s urbanized areas. Unchecked development in the second half of the twentieth century led to much of Tahoe’s marshes and wetlands being paved over. Those sensitive lands had acted as natural pollution filters for the Lake. Now, when rain hits our miles of roads and acres of parking lots, it washes off fine sediment particles — smaller than the width of a human hair — and nutrients like phosphorus and nitrogen. When that stormwater hits the Lake, the fine sediment pollution remains suspended in the water, and the nutrients feed the growth of excess algae. 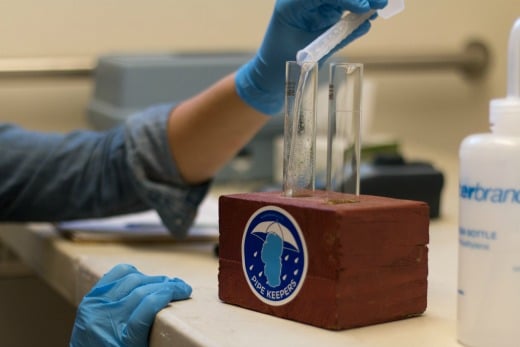 Fortunately, local and state agencies who manage Tahoe’s roads have been taking action. State highway departments have installed miles of curb-and-gutter projects to better redirect stormwater runoff and reduce erosion. Tahoe’s counties and the City of South Lake Tahoe have been prioritizing the pipes that cause the biggest problems, retrofitting aging systems to improve stormwater filtering before it reaches Lake Tahoe.

There is still much to do, and now climate change is hitting the accelerator on Tahoe’s stormwater issues. While western states have experienced considerable drought in recent years, all climate projections show an increased intensity in precipitation events, making storms like October’s more common. They also project that more of the Sierra Nevada’s precipitation will arrive as rain instead of snow. This will put even more strain on the Tahoe Basin’s stormwater infrastructure and could potentially transport more pollution to the Lake.

Fixing Lake Tahoe’s stormwater pollution problem will take both science and political will. Pipe Keepers is helping on both fronts. Pipe Keepers volunteers are building a rich dataset that the League shares with local agencies and Tahoe researchers to better understand the problem.

And by its nature, citizen science programs allow more community members to participate in efforts to combat pollution at Tahoe, which is building a larger and more informed constituency to advocate for solutions. Only time will tell if it’s enough, but we have reason to hope that together, we can Keep Tahoe Blue.