The Town that Fought Tar Sands

In 2008, Portland Pipeline was quietly making plans to reverse the flow of their 236 mile long oil pipeline between Portland, Maine and Montreal, Canada. The pipeline, built in World War II to deliver oil to Canada, is capable of carrying 600,000 barrels per day and flows across rivers, streams, and lakes in Vermont, New Hampshire, and Maine. Reversing the pipeline’s flow would give oil companies their first year-round deep-water port in the Northeast and a way to export a volume of about 70 percent of the proposed Keystone XL pipeline.

Tar sands extraction in the Canadian Boreal Forest is devastating to the environment, wildlife, and people. Generating enough heat and steam to melt the oil out of the sand is extremely energy and water intensive. During my visit to Fort McMurray, Alberta with Forest Ethics, I flew over vast tailing ponds (the toxic liquid byproduct of tar sands processing) where gunfire goes off every 30 seconds to keep birds from landing and dying. Nearby, the moose population, a dietary staple of the First Nations People, has been contaminated with arsenic.

But tar sands production doesn’t just impact Canada. To get this thick bitumen to flow through a pipeline, chemicals like benzene are added. The benzene must be burned off before the crude is loaded on a ship. The residents of South Portland, Maine learned that two 70-foot tall smokestacks—vapor combustion units—were slated for their community, right next to a public park and seven local schools. Residents also worried about the risk of a potential spill and its impact on drinking water, and the lobster and fishing industries.

Few people in South Portland had heard of tar sands in 2008, but by 2014 that had changed. That’s because a group of citizens had formed “Protect South Portland,” going door-to-door to educate their neighbors about the threat of tar sands shipments in their community. They were aided by several other local nonprofits including Natural Resource Council of Maine, Environment Maine, and Conservation Law Foundation. As a funder, I supported these groups’ grassroots organizing efforts.

What could a community with only 25,000 residents do to prevent the pipeline reversal and port expansion? South Portland decided that the best approach would be to establish a local zoning ordinance restricting the benzene burn-off and bulk loading of unrefined product. 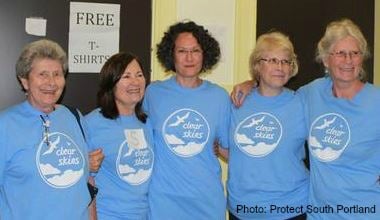 Posters were strategically placed at the entrance to the community and along major roads. Supporters of the ordinance packed city council meetings wearing matching t-shirts, and gave impassioned testimony. The strategy worked: The city council approved the Clear Skies Ordinance in a 6-1 vote in July 2014.

Portland Pipeline, not surprisingly, wasn’t happy with the decision. In January 2015 they filed a lawsuit against the community of South Portland, alleging that “the ordinance interferes with interstate trade, discriminates against Canadian interests, devalues the pipeline and infringes on areas best left to the federal government.”

So the city council hired the Boston-based law firm of Foley Hoag to file a motion to the US District Court requesting the lawsuit be dismissed. Portland Pipeline still claims it is not intending to reverse the flow of the pipeline.

Tar sands companies are desperate to get pipeline capacity and access to overseas markets through places like South Portland. They are willing to influence politicians like Maine’s conservative Governor Paul LePage who retaliated by removing South Portland’s business-friendly designation.

The fight isn’t over, but we’ve made progress. Our experience in South Portland shows that grassroots organizing—neighbors talking to neighbors—is a powerful force. Towns and cities across the US and Canada are now fighting back against tar sands infrastructure. Together, they’re bringing a clean future within reach. 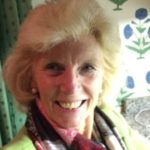 Janet Miller has been a member of Rachel’s Network since 2014. She is president of WestWind Foundation, a family foundation that focuses on a healthy, sustainable environment and provides support to environmental and reproductive health organizations. To learn more about Protect South Portland, visit protectsouthportland.org.