The Power of One Voice – Celebrating the Life of Rachel Carson

“Who is Rachel Carson?” It’s a question I often hear from general audiences. If people do know about her, it’s usually in the context of DDT. Yet, for those who know Rachel Carson’s extensive work, her message is more relevant today than ever before. Her life story is one of the most inspiring testaments to courage of our time.

The Power of One Voice is a new documentary film that introduces Rachel Carson to modern audiences. The film shows how Rachel Carson came to her conviction that humans are deeply connected to other living things, and why we must avoid harming the natural world.

Rachel Carson spent her childhood exploring the fields and streams near her home; she saw the creatures of the woods as her friends. This early exposure to the natural world set the stage for her life-long dedication to the Earth.

The film sets the backdrop for her work in the post-World War II era of overenthusiastic embrace of technology, and her struggle to defend wildlife even within the Fish and Wildlife Service.

Her position as a woman scientist blazed a path for many of us who followed in her footsteps. She was discouraged from joining field explorations her male marine biologist counterparts took for granted. She faced not only discrimination in her field but also the absence of a defined role for scientists as environmental advocates.

Her pioneering spirit as a writer, scientist and naturalist comes through in her influential 1963 testimony to Congress on the dangers of pesticides. The film concludes by revealing how Carson struggled to complete Silent Spring in the face of terminal breast cancer.

The Power of One Voice also reflects on the lasting legacy of Carson’s work from the perspective of contemporary scientists and journalists working in the field. It explores the chemical industry today and the radioactive fallout that people are still exposed to throughout their lives.

The Power of One Voice grew from a conference The Rachel Carson Institute held in 2012 celebrating the 50th anniversary of the publication of Silent Spring. Carson’s son Roger Christie provides an intimate picture of her life and personality, with detail from her principal biographer, Linda J. Lear and with perspectives from Mark Madison, Archivist and Historian for the Fish and Wildlife Service at the National Conservation Training Center.

Scientists Scott Weidensaul and Louis Guillette, and journalist Don Hopey of the Pittsburgh Post-Gazette give perspectives on her professional life and the relevance of her work and writing today. Patricia DeMarco, retired director of the Rachel Carson Institute and former Director of the Rachel Carson Homestead Association, provided connective narrative, research and resources.

Through the lens of award winning filmmaker Mark Dixon, Rachel Carson’s story assumes a fullness and inspiring relevance to the issues we confront today. Each age needs its heroes.  Rachel Carson was truly a hero of our time. Her lessons go far beyond Silent Spring. Her love for nature and personal courage in the face of adversity speaks to all of us today.

Learn more about the film and how to hold a screening at powerofonevoicefilm.com. 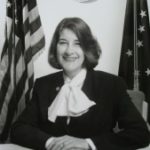 Patricia M. DeMarco is president of DeMarco & Associates; visiting researcher and writer at Carnegie Mellon University, and senior scholar at Chatham University. She has spent a thirty-year career in energy and environmental policy in both private and public sector positions.