Women Leading us to a Toxic-Free Future

From formaldehyde in nail polish, to styrene in menstrual pads, to mercury in mascara, there are 80,000 chemicals used in products in the US, yet only 200 have been thoroughly evaluated for safety.

This has resulted in an enormous cost to women’s health. Breast cancer rates are higher than ever, the onset of puberty in girls is occurring at an earlier age, and women commonly struggle with infertility. Research shows that exposure to environmental toxins is playing an increasingly significant role.

Since 1995, Women’s Voices for the Earth has been amplifying women’s voices to eliminate the toxic chemicals that harm our health and communities. Using the power of social media, online organizing, and public action, our national network of women has taken on corporate giants like Procter & Gamble (P&G), and won. Together, we have made great strides in eliminating toxic chemicals from cleaning, feminine care and salon products.

In 2013, Women’s Voices for the Earth tested numerous laundry detergents and found the carcinogen, 1,4 dioxane hiding in Tide, and shockingly, Tide Free and Gentle, a product marketed to new moms as a healthy choice for their babies.

So we organized an online campaign calling on all moms (and all those who love babies) to post an image of a baby in a laundry basket with the detergent and a caption, “OMG! There’s a cancer-causing chemical in my Tide!”

Thousands of women posted on Tide’s Facebook wall, nearly 80,000 signed a petition urging to P&G to remove the chemical, and news organizations across the country covered the story. In just four months, P&G agreed to remove the harmful chemical from their detergents, impacting 70 percent of the US detergent market.

More recently, after testing and discovering chemicals like chloroform and styrene in Always pads, Women’s Voices orchestrated a national day of action calling on P&G to disclose the ingredients used in their tampons and pads and ensure the safety of their feminine products.

Thousands participated in a “thunderclap” social media action (all tweeting to the company on a given day), and sent email action alerts to the CEO. A core group gathered outside P&G shareholder meetings with signs reading, ‘Women should ALWAYS know what’s in their pads and tampons,’ and ‘I care. Period.’ The rally was covered by multiple news outlets, including the New York Times.

The company’s response was unprecedented. They immediately began disclosing some (not all, yet) of the ingredients in their tampons and pads, and within a few months released a complete list of ingredients which they don’t use in their fragrances.

After the rally, we were invited to meet with top officials at the company, beginning what has been a year of constructive dialogue about women’s health, and improving the transparency of ingredients and the processes they use to determine product safety.

Without thousands of women across the country raising their voices, none of this would have been possible. Every day, I am inspired by the actions that the women in our community take. I want them to know that when our staff members are at the table negotiating with global companies like P&G, it’s because the collective actions of so many women have put us there.

To learn more about our campaigns and the impacts of toxic chemicals on women’s health, and to join us, visit www.womensvoices.org. 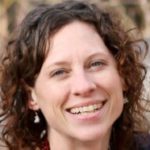 Erin Switalski is the Executive Director of Women’s Voices for the Earth. She is a 2010 winner of the “40 Under 40” Leadership Award in Advocacy from the New Leaders Council. She is also featured in the 2014 Link TV special, UNSAFE: The Truth Behind Everyday Chemicals. Erin regularly speaks about the power of women to move major corporations and influence policy.