Rachel’s Network has strong roots in Colorado. Home to over a dozen of our members, beautiful national parks, innovative research institutions, and a culture of environmentalism, it was the perfect place for our Fall Retreat after over a decade’s absence.

The retreat opened with President Fern Shepard and Board Chair Kef Kasdin sharing Network updates and the conference theme: restoration. The dark cloud for women and the environment that descended after last years’ election has galvanized members’ actions in the last year, ramping up involvement in co-funding, the roster of our liaisons and advisors, partnerships with other organizations, and more.

Environmental leader Maggie Fox, past president and CEO of the Climate Reality Project, shared this sense of urgency and asked guests to reflect on the cultural relevance of their work. “We need to grow and build, not just fight,” she said.

‘The future is already here — it’s just not evenly distributed,” said Hunter, quoting William Gibson. She, Claudine and Leslie summarized the rapid transition we’re undergoing from fossil fuels to renewable energy, and the financial benefits of doing so. Susan shared the work CCL is doing to pass a federal price on carbon.

An evening reception at Anne Butterfield’s home in the mountains above Boulder featured Rocky Mountain Land Use Institute Executive Director Susan Daggett who has fought for decades to secure the legal protection for public lands. 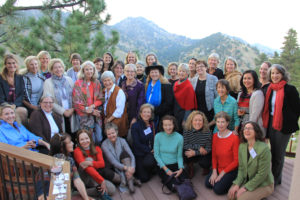 Members and guests in Boulder

The next morning started with a tour of the world-renowned National Renewable Energy Lab (NREL)’s Energy Systems Integration Facility and Research Support Facility where members got to peek behind the scenes on cutting-edge micro-grid research, 3D data visualization, and net-zero building design.

Then we headed up 11,000 feet through the snow-capped mountains at Berthoud Pass to Devil’s Thumb Ranch in Tabernash. There, Former Assistant Secretary for Water and Science at the Department of the Interior Anne Castle kicked off two days of intensive excursions and presentations on Colorado River restoration.

Anne lauded the newly signed water-sharing agreement between the US and Mexico, Minute 323, which is designed to protect reservoirs like Lake Mead in times of drought. The agreement came up many times during the retreat as an example of cooperation following years of contentious battles over Western water and natural resources.

Speakers repeatedly emphasized the need to address water scarcity in a region stressed by development and climate change. “We don’t pay a monthly water bill to the Colorado River, and that’s a problem,” said Aaron. In addition to Minute 323, local efforts like the Colorado Water Plan and Grand County’s Learning by Doing are doing smaller-scale restoration work. As places like Denver grow, this work has become more necessary than ever.

Network Engagement Director Ariana Carella provided updates on recent Rachel’s Network co-funding activities including our work to build a glyphosate research library, fight the US-Mexico border wall and industry overuse of antibiotics, increase the diversity and inclusion of the environmental community, and document the environmental voting records of women in Congress.

Turner Endangered Species Fund Executive Director Mike Phillips closed the evening by detailing the Rocky Mountain Wolf Project’s plan to restore the gray wolf to Colorado. The restoration would close a major gap in habitat between Yellowstone ecosystem and surrounding areas, and Mexican wolf habitat in the Southwest.

Our third and final day in Colorado included a day-long excursion around the West Slope communities of Fraser, Winter Park, Granby and Kremmling to see both water diversion and water restoration projects.

The day’s lead guide, Trout Unlimited Legal Counsel Mely Whiting, explained that 80 percent of the rural West Slope’s water will end up in the urban Front Range/East Slope due to diversions. This has all kinds of impacts on the West Slope like increased sediment, algae, fish kills from warming water, and decreased water supply for farmers. While still a prickly issue, major stakeholders on both sides of the range have started coming together to mitigate the damage from these diversions. 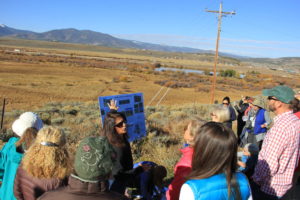 The diversions were evident at Windy Gap Reservoir, where water is stored in an artificial lake, and Moffat Tunnel, where it’s piped miles under the mountains to the Front Range. Windy Gap has had major impacts on stonefly populations (and thus, trout fisheries) downstream and Grand County wants a portion of the river to “bypass” the reservoir so wildlife can get through. The project is expected to cost nearly $10 million.

An ongoing restoration project at Fraser Flats shows what such a bypass might look like. Denver Water Environmental Scientist Jessica Alexander explained that diversions had made the Fraser River too shallow for many fish to survive and so they joined with local partners like the owner of nearby Devil’s Thumb Ranch to narrow and deepen the river with rocks. This will make the river more resilient in dry conditions.

We ended the excursion at Reeder Creek Ranch where Paul Bruchez is working on a similar restoration project on the Colorado River which runs through his private cattle ranch. Paul is also a fly-fishing guide and depends on the river’s health for his livelihood. Paul is a joined the Irrigators of Lands in the Vicinity of Kremmling (ILVK) and other stakeholders to secure a federal grant for $7.75 million to collectively restore portions of the Upper Colorado River.

Back at Devil’s Thumb, Southern Plains Land Trust Executive Director Nicole Rosmarino closed our program with another positive story in her organization’s restoration of shortgrass prairies in the Southeast corner of the state through private reserves. Prairie dogs, bison, red-tailed hawks, and a host of other animals call the reserve home, and their expansion will mean even greater protection.

Our time in Colorado taught us that restoration requires the same ecosystem of actors that keeps a habitat healthy. Despite the challenge presented by population growth, climate change, and degraded landscapes, people are relying on science and coming together under the growing recognition that a healthier environment can be achieved.

After visiting Colorado for our 2017 Fall Retreat, Rachel’s Network provided grants to partners working on the ground to conserve habitat and build new constituencies for conservation.