Martha Davis: A Champion for the Queen Conch

Community Conch is a Rachel’s Network Fiscal Sponsorship Fund that launched in 2009.

There’s something evocative and beautiful about a conch shell. What other object contains the sound of the sea it once inhabited so faithfully? It’s hard to resist raising one to an ear to hear the waves of the Caribbean and Florida Coast.

It’s the soft, long-lived queen conch that lives inside this shell though that called to Rachel’s Network Member Martha Davis when she was doing field work in the Bahamas for her master’s degree in marine conservation.

It was there that Martha learned that the Bahamas’ queen conch population was declining. While conch has been a central part of Bahamian cuisine, economy, and culture for centuries; growing demand from the US was jeopardizing local populations of the species. So in 2009, she established a nonprofit – Community Conch – to conduct surveys, raise awareness, and try and reverse the decline.

In 2012, it looked as if Martha and her partners might have an ally. Scientists at NOAA’s National Marine Fisheries Service began studying whether the queen conch deserved protection under the US Endangered Species Act. Such a designation would prevent places like the Bahamas from exporting conch to the US.

But it wasn’t to be. In 2014, NOAA determined the queen conch wasn’t in need of listing. “Over the past 20 years the amount of conch has remained stable,” NOAA Fisheries biologist Bob Hoffman said on the ruling.

Martha begs to differ. “Our data demonstrates widespread, inadequate densities for reproduction in the Bahamas, and evidence of illegal poaching by countries whose conch stocks have failed,” she says. “We think that harvest appears stable because of the increased fishing of juveniles.”

“Many in the Caribbean felt that listing wasn’t necessary because other mechanisms were in place,” she added. “The reality is that these mechanisms in the Bahamas aren’t working.”

Martha remains hopeful despite the ruling. Community Conch has garnered the support of scientists at the Smithsonian field station in Fort Pierce, Florida, and the Shedd Aquarium in Chicago who are providing valuable research assistance and a vessel to help Martha and her team continue their work. 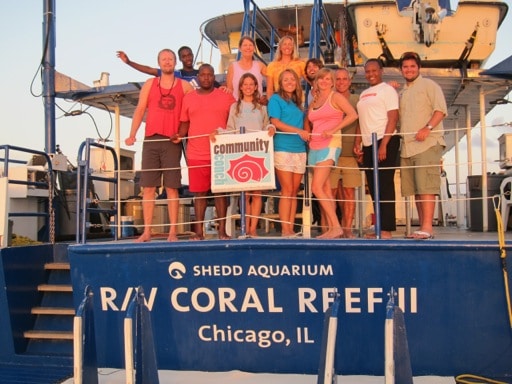 With the help of these partners, Community Conch’s 2014 surveys revealed important information about Bahamian conch populations. They found that conch near human settlements were too sparse to allow them to reproduce (30 conch/hectare). Those populations with adequate densities (greater than 50/hectare) for reproduction were few, and in deeper waters. They also used non-lethal methods to gather conch tissue for genetic studies.

The Nature Conservancy (TNC) is also considering joining the effort to save conch using methods it developed on the Bahamian lobster fishery. “This partnership, in addition to those with the Shedd Aquarium and the Smithsonian has the potential to finally move the needle on conch management in the Caribbean,” Martha says. “TNC has the clout, resources, and resilience to support this effort. Our optimism has improved substantially.”

Without buy-in from and collaboration with the fishermen themselves, these efforts could be undone. That’s why Community Conch is piloting a project this summer with local fishermen in the Bight of Abaco where conch stocks are severely depleted. They’ll work with the community to map, survey and patrol the juvenile conch areas. Some fishermen have expressed their concern for juveniles, so it’s a promising approach.

A future without queen conch would be a huge loss for the Bahamas, both economically and culturally. But with Martha’s help, and the commitment of her partners, volunteers, and local fisherman, the Bahamas can build back its conch population.

To watch a film about Community Conch’s work in the Bahamas, click here.