Divest-Invest Philanthropy — launched by Lisa Renstrom through Rachel’s Network’s Fiscal Sponsorship Fund — is a coalition of U.S. and global foundations that have pledged to divest from fossil fuel companies and invest in the clean energy economy.   Expanding her focus to include Divest-Invest for individuals, Lisa answers these FAQs that investors may have when considering shifting assets to sustainable-energy alternatives:

I want to engage in shareholder advocacy, does this eliminate that option?

Many Divest-Invest signatories maintain small, strategic positions in oil, gas, and coal companies in order to engage in shareholder advocacy. Maintaining those positions is still consistent with the Divest-Invest campaign because it provides a crucial platform from which to pressure companies to change their practices. Divest-Invest is interested in expanding, not limiting, the ways in which investors can exert pressure on the fossil fuel industry.

If the oil and gas companies are buying up the major renewable-energy companies, how can I invest in the renewable market?

Yes, some renewable-energy companies are owned outright or in part by the largest 200 oil, gas, and coal companies. However, there are plenty of publicly traded carbon-free investment alternatives that are not controlled by oil, gas, and coal companies. Even if you opt to buy shares in conventional energy companies that have renewable divisions, they will still be risky due to the stranded-asset problem. For more due-diligence help, you can visit the Carbon Disclosure Project‘s website at CDP.net (CDP collects self-reported climate change, water and forest-risk data that companies self-report. This information helps investors mitigate risk and capitalize on opportunities to help make industry more sustainable).

There is a growing array of fossil-free alternatives for investors who opt to put their money behind the transition to a new-energy economy. Examples include an expanding number of mutual funds and exchange-traded funds (ETFs) as well as individual companies, such as First Solar, Solar City, Tesla, and Vestas (wind). Divest-Invest Philanthropy is building a database that will make it easier for institutional and individual investors to identify these options, and (if they wish) locate ESG and SRI financial managers who specialize in fossil-free investment.

You might not want to replace your fossil fuel stock purely with renewable-energy alternatives. You may simply choose to re-balance across the other sectors and reduce your exposure to the energy sector, reallocating your other holdings to include more large-cap options in other industries.

Fossil-fuel energy investments are not required for competitive returns in balanced portfolios. There is a growing body of research grounded in at least a ten-year time span that includes work from Aperio, S&P Capital IQ, MSCI Advisor Partners, and Impax Asset Management.

If you seek to retain five to six percent of your portfolio in energy, this can be accomplished by investing that share of your portfolio in carbon-free energy companies. Many carbon-free assets are currently outperforming the general market as measured by standard benchmarks. This is partly because these businesses are often grounded in disruptive technology, giving them the potential for rapid growth.

Is divestment from fossil fuels risky?

The most salient data on the risk of divestment is the Aperio study. It shows that excluding publicly traded stocks tied to the Filthy 15 biggest coal companies “incurs virtually no risk penalty” at all for investors. Excluding the assets of the largest 200 oil, gas, and coal companies increases risk by a negligible amount, Aperio found. The theoretical return penalty amounted to just 0.0034 percent. It is important to understand that this is regarding risk only, and not related to the performance of carbon-free portfolios vs. standard portfolios that included carbon-intensive assets.

Is it too soon to tell what the long-term impact of divestment will be on financial performance?

The studies cited above cover at least a 10-year time span. The back tests are compelling. If you compare the MSCI all Country World Index (ACWI) with a simulated carbon-free benchmark over the 15 years ending in 2012, the carbon-free variant actually outperformed the ACWI (6.08 percent vs. 5.43 percent). That leaves out the most recent past 15 months, during which oil and gas have under-performed the market and coal has plummeted.

To date, two empirical studies have attributed a cost to fossil-fuel divestment. One came from Cambridge Associates, a large endowment manager, which conducted a long-term back test on one college endowment (Pomona). Cambridge’s premise was that divestment would theoretically require changing Pomona’s investment strategy from “active” to “passive,” thus forgoing any returns associated with active asset picking. This assumption carries little weight in the investment community.

The other research often cited as evidence that fossil-fuel divestment curbs returns relied on a cherry-picked time frame. Published by the American Petroleum Institute, this study examined oil and gas returns for pension funds between 2005 and 2009. Oil prices shot up from $50 to $147 per barrel during that period.

Research on the fact that fossil-fuel companies have assets on their balance sheets that are unlikely to be extracted is rather recent. Carbon Tracker only published its seminal Unburnable Carbon white paper in March 2012. The financial industry is still factoring this analysis into its pricing of oil, gas, and coal assets.

Why focus on oil, gas, and coal companies when everyone and everything is consuming fossil fuels in one way or another?

Other companies are certainly playing a role in keeping the global economy running on fossil fuels. The point of focusing on the 200 largest oil, gas, and coal companies is that they face the largest risk of “stranded assets.”

Experts from PricewaterhouseCoopers, the London School of Economics, and Standard & Poor’s agree that fossil-fuel asset prices are inflated. Why? Because their value is tied to coal, oil, and gas reserves that can’t be fully exploited.

What’s a “stranded” asset? It’s something that loses financial value long before the end of its anticipated useful life. Once Wall Street realizes that those fossil-fuel reserves are destined to become unusable assets, it will render oil, gas, and coal companies much less valuable than they are today. An economic adjustment will follow.

This economic disruption is both inevitable and required for a livable climate. Instead of responding to this reality, oil, gas, and coal companies are squandering $600 billion every year to explore and develop new reserves that can never be burned. This waste of shareholder capital should be invested instead in transitioning to a new economy powered by clean energy.

How have oil, gas, and coal stocks performed in recent years?

Conventional energy industries have been under-performing the S&P for at least the past five years. It is possible to use exchange-traded funds (ETFs) to review the performance of oil and gas together, as well as coal. This first chart tracks the five-year performance of a coal (ETF)* KOL** and the oil+gas Energy Select Sector ETF (XLE)*** in comparison with the S&P 500. This chart shows that investors who retained fossil-fuel assets paid a price for those holdings. Investors who divested from coal, oil, and gas five years ago had an opportunity to benefit from that action. 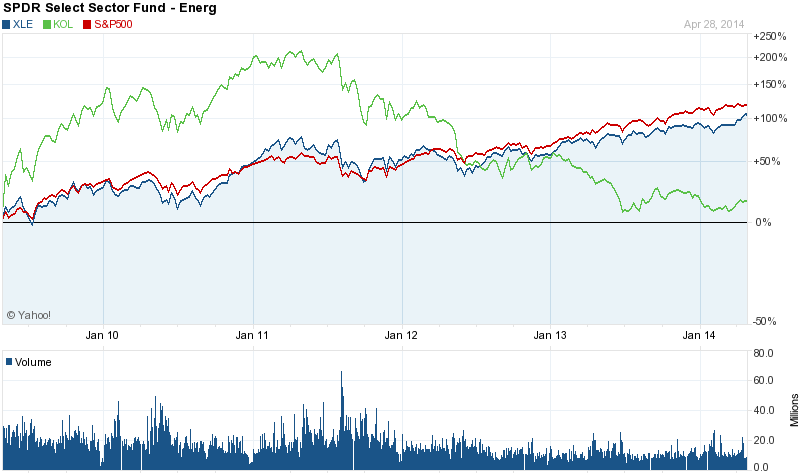 The next chart depicts the financial performance of oil, gas, and coal over the past two years. It makes an even stronger financial case for fossil-fuel divestment. The coal benchmark fell more than 40 percent over the 2-year period ending in April 2014, while the S&P gained more than 35 percent. The oil and gas benchmark, despite the rise of fracking (shale) gas, underperformed the S&P in this time frame. Investors who divested from fossil fuels two years ago had a significant opportunity to benefit from that action. 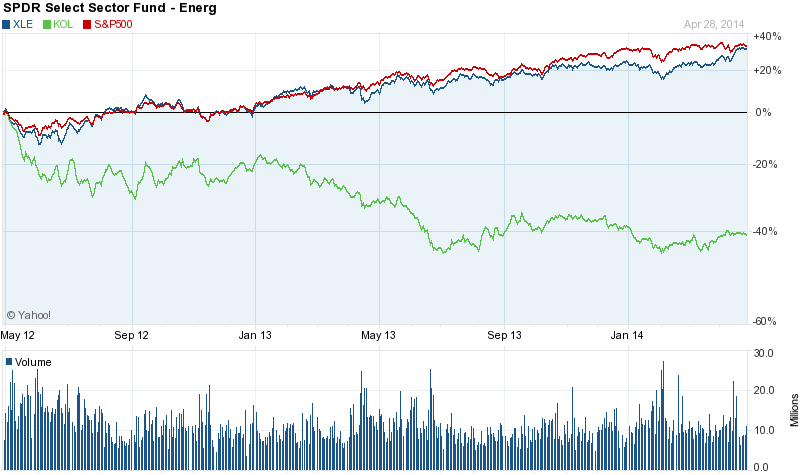 *ETF stands for Exchange-Traded Fund. An ETF is a security that tracks an index, a commodity, or a basket of assets like an index fund, but trades like a stock on an exchange. ETFs experience price changes throughout the day as they are bought and sold.
**The Market Vectors Coal ETF (KOL) is comprised of companies that generate at least 50% of their revenues from (or, in certain circumstances, have at least 50% of their assets related to): coal operation (production and mining), coal transportation and production of coal mining equipment as well as coal storage. CONSOL Energy, Joy Global, and China Shenhua Energy are its top holdings.
***The XLE Energy Select Sector SPDR (XLE) is an oil and gas ETF. It pools shares in companies from the following industries: oil, gas, and consumable fuels; and energy equipment and services. ExxonMobil, Chevron, and Schlumberger are its biggest components.

Past performance never guarantees future results. However, it often turns out that the past year gives investors a good idea of which industries will perform well over the next 12 months, while market norms seen over the prior 10 years offer little insight into how the market will look over the next decade.

In addition, any financial discussion of the consequences of fossil-fuel divestment today should pay close attention to the coal industry’s ongoing free fall and recent declarations by major oil companies that recognize the risks  associated with carbon-intensive industries.

Lisa Renstrom is a Trustee of Bonwood Social Investment.  She is a member and former president of Rachel’s Network and of the Sierra Club.  She serves on the Board of Directors of Interfaith Power and Light, the Green Science Policy Institute, ecoAmerica, and Rachel’s Action Network.  She is an alumna of the Harvard Business School Owner/President Management Program and holds a Master’s degree in Public Policy from the Kennedy School of Government.

The Rachel’s Network Fiscal Sponsorship Fund empowers members to develop entrepreneurial programs into independent nonprofits. Through it, members may initiate a project through the Network’s established 501(c)(3) nonprofit structure without having to assume the administrative responsibilities of establishing a new legal entity. This process affords members the freedom to manage their projects and nurture their budding organizations’ growth.