With more than half of the world’s population living in urban areas (and growing), addressing sustainability in our cities is a crucial undertaking. One city facing this challenge head-on is Portland, Oregon. From its renowned bike culture and green buildings, to its park system and green infrastructure, the city serves as a showcase for innovation in sustainable planning. Rachel’s Network members and guests traveled there in October for our Fall Retreat to hear from experts on the exciting solutions being developed in the region.

After guests officially welcomed new President Fern Shepard to the community, Curtis Ogden of the Interaction Institute for Social Change led an inspiring session on the power of networks like ours to affect change. “We’re already networked, we just don’t always know it or take advantage of it,” he said. Detailing the many functions that networks can serve, he encouraged members to reflect on the kind of organization they wanted to be.

Rachel’s Network & Ashoka Fellow Janelle Orsi, founder of the Sustainable Economies Law Center (SELC), followed Curtis with an update on one area the Network has already made a collective difference: her three-year Fellowship. “We’ve managed to change three states’ laws in the last three years,” Janelle said, referring to SELC’s work on seed sharing, home-based food businesses, cooperative housing, and more. “When Rachel’s Network and Ashoka came along [with the fellowship], it allowed us to focus on that long-term change.”

Full of inspiration, participants ventured out to explore the city with Portland’s Green Building Manager Alisa Kane and First Lady Nancy Hales. They explained how the Pearl District, once a heavy industrial sector, was turned into one of the most vibrant neighborhoods in the city in just over a decade. From its streetcars, parks, and green buildings, to its thriving mix of small businesses and residential development, features of “The Pearl” have been emulated around the world. 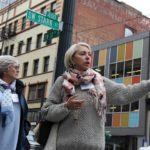 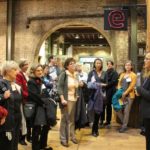 Ecotrust board member and Beneficial State Bank Founder Kat Taylor provided the keynote for the night’s reception, attended by a number of Portland’s change-agents. “We have to be driving towards an economy that’s fully inclusive, racially and gender just, environmentally regenerative – not just sustainable,” said Kat. She explained how Beneficial is working toward that goal by supporting affordable housing, renewable energy, and nonprofit loans, among many other programs, and redefining what banking can be in the process. 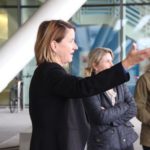 Leah Treat, director of the Portland Bureau of Transportation, talks about Portland’s leadership on sustainable transportation.

Since most of our country’s carbon emissions now come from transportation, the humble bicycle has an important role to play in the city of the future. Members hopped on bikes to learn what makes Portland’s bike infrastructure and traffic design the envy of other US cities. The tour ended at Tilikum Crossing, the country’s largest car-free bridge, with Leah Treat, director of the Portland Bureau of Transportation, who shared her department’s work on creating a multi-modal hub in the city and making it easier for families to get on bikes.

After an active day outside, participants enjoyed a reflective dinner with Rose High Bear, co-founder and executive director of Wisdom of the Elders. She shared her backstory as an Athabaskan who reconnected to her culture later in life, and her work to bring people of diverse backgrounds together for environmental restoration.

Scientists in Oregon were some of the first to raise the alarm on ocean acidification’s impact on ecosystems. On Friday, members and guests took a trip to the coast to hear from one of these scientists, George Waldbusser of Oregon State University, and Whiskey Creek Shellfish Hatchery owner Sue Cudd. Thanks to a partnership between OSU and Whiskey Creek, the hatchery was able to pinpoint acidification as the culprit behind its significant oyster die-off in 2008, and adjust its practices to save the business. Scientists like George are also studying the impacts of acidification in the complex ecosystem outside the hatchery – in Netarts Bay. 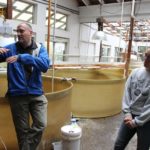 George Waldbusser and Sue Cudd talk about the impacts of ocean acidification on oysters in Oregon.

George and Sue were also joined by Janis Searles Jones of Ocean Conservancy who shared the policy side of protecting places like the Oregon Coast. Janis engages business owners like Sue to lobby their members of Congress on the importance of taking action on climate change.

After lunch, members took a scenic walk at Sitka Sedge Natural Area, site of one of the last intact estuary systems in Oregon (and Oregon’s newest state park). Joining them were wildlife expert Stanley Senner of the National Audubon Society; Amrita Vassal from Ecotrust Forests, which facilitated the property’s conservation; and Kirk Barham, park manager with Oregon Parks and Recreation. Along the way, members got to see the flora and fauna that make this place so special: from the many birds that migrate along the coast to the amphibians and mushrooms peeking through leaves on the forest floor. 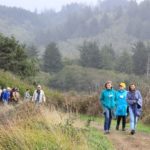 Back in Portland, Andrea Durbin of the Oregon Environmental Council and Kristen Sheeran of 3Degrees closed out our program by sharing how the city and state are pioneering clean energy policies. Their recent success was the passage of the Clean Energy and Coal Transition Act, a bill that makes Oregon the first state in the nation to ban coal-fired electricity. It was yet another example of the solutions coming from the region. Members left the retreat full of ideas to inform their own funding, advocacy, and networking.