I dream a dream of Tahoe, wherever I may go
I dream a dream of Tahoe, in sunshine or in snow
I see its cobalt waters and the alpine afterglow
And I’ll return to Tahoe from wherever I may go.
Yes I’ll return to Tahoe, despite where winds may blow
Where pine and aspen forest take many years to grow
The air is clear and brilliant, where Sierra meets the sky
It fills me with the sadness when I must say goodbye
But if we keep its blueness, this lake will never die
And the children of our children will never need to cry
Dr. Charles Goldman

In July, Rachel’s Network traveled to Lake Tahoe to learn more about the environmental issues facing the region. Hosted by members Adriana Hayward and Kimberley Milligan, who support several organizations there, Rachel’s Network met with conservation leaders and got an up-close look at work on the ground.

Rachel’s Network kicked off the event with Darcie Goodman Collins, Erica Mirich, and Jesse Patterson of the League to Save Lake Tahoe on the Sierra Cloud Catamaran to learn about their citizen science programs that tackle urban stormwater runoff and aquatic invasive species, as well as their youth education and beach cleanup initiatives.

On the scenic boat ride, we were joined by Dr. Charles Goldman, a limnologist who founded the UC Davis Tahoe Environmental Research Center (TERC), a national leader in water quality and lake ecology research. TERC has collaborated with the League since the 1950s, combining their efforts in advocacy, education, and scientific research. 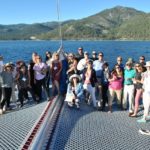 Dr. Goldman explained how car traffic has led to water pollution and sediment in the lake. Because of this, transportation advocacy is a high priority for many organizations in the region. For its part, the League holds meetings with the Tahoe Regional Planning Agency; serving as an advocate for good land use planning; and weighing in on new commercial development that would have harmful impacts on the Lake.

“The League to Save Lake Tahoe has also become a dynamic leader in demonstrating how other conservation groups can set standards for preservation, find collaborative solutions, and empower and educate citizen scientists. We commend their passion to preserve one of the most beautiful jewels on the planet,” said Adriana.

After the boat ride, members enjoyed dinner with Lucy Blake of the Northern Sierra Partnership (NSP), a group of five organizations that joined forces in 2007 to promote conservation in the northern Sierra: Feather River Land Trust, Sierra Business Council, The Nature Conservancy, The Trust for Public Land, and Truckee Donner Land Trust.

NSP works in six landscapes across the northern Sierra to preserve watersheds that supply drinking water to much of California and Nevada – 60 percent of the water that supports life in California begins as rain and snowfall in the Sierra. The area also contains the greatest diversity of plant and animal species in the state.

Each organization in the partnership plays a unique role in this effort, demonstrating that they are stronger together and more likely to reach their ambitious 2020 goal of conserving 188,000 acres. 60,000 acres have been conserved so far.

While the southern and central Sierra are conserved through contiguous national parks, national forests, and wilderness areas, the northern Sierra is a “checkerboard” of public-private ownership due to land grants after the Civil War. For that reason, Lucy said, NSP works closely with public partners and local landowners.

The next day, members joined American Rivers in Hope Valley at the south end of the lake, where staffers Julie Fair and Luke Hunt led us through the healthy meadows benefiting from their restoration work. 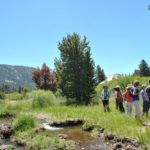 Hope Valley Meadow provides natural water storage and filtration, and serves as an integral ecological component of the West Fork Carson River, the drinking water supply for many communities in Western Nevada.

Recognizing that the meadow was suffering from human development and heavy grazing, American Rivers began restoration in 2009. They built log structures that limit erosion and create habitats for fish; placed sod blocks at the tow of eroding banks; planted willows and allowed beavers to build porous dams.

“It was wonderful to share a bit about American Rivers’ work with Rachel’s Network members,” said Member Kimberley Milligan, vice chair of the American Rivers board. “Mountain meadows are majestic landscapes and their health is crucial to protecting the headwaters of our nation’s rivers.”

After the excursion in Hope Valley, members visited Sorensen’s Resort to meet with owners John and Patty Brissenden. The Brissendens discussed their work with The Sierra Fund, a community foundation that fosters private and public conservation investments.

The Sierra Fund also identifies critically-needed programs; their signature program, Reclaiming the Sierra, addresses the damaging legacy of mining in California. The Brissendens also shared their involvement with conservation groups Friends of Hope Valley and the Sierra Nevada Alliance.

Members then traveled up the east shore to Incline Village to meet with Heather Segale, Patricia Maloney, and docent Tim Kosier of TERC, who talked about their work monitoring the lake’s clarity and controlling aquatic invasive species such as Asian clams. Patricia, a forest ecologist and conservation biologist at TERC is also evaluating the effects of pine beetle outbreaks and climate change on already drought-stressed trees. 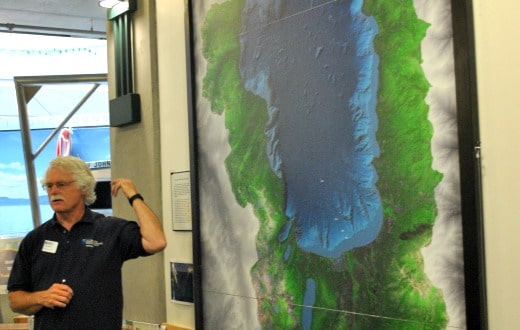 The Forest Service is adapting to these threats by reducing forest densities to decrease severe fires, and refocusing on ecosystem processes at a broad scale, instead of single-species conservation.

“These regional events are all about connections, with one another as a community and with the landscapes we seek to protect,” said Rachel’s Network President Thu Pham. “It’s great to be in the field to inspire the work we do as funders and leaders.”

Rachel’s Network members were inspired by the people and organizations dedicated to preserving the Sierra Nevada’s ecology and beauty for the communities that rely on it, now and into the future.