As I reflect on my experience at the Women’s March on Washington on Saturday, many moments come to mind, but the one that sticks with me was a relatively quiet one.

Rachel’s Network President Fern Shepard and I were leaving the massive and energetic crowd that, now late in the afternoon, was still marching toward the White House donned in pink hats.

We happened to pass the Environmental Protection Agency’s headquarters in downtown DC. We had just left one of our signs among a growing collection outside the Smithsonian National Museum of American History (it was a historic day, after all), so we decided to leave a lone Rachel’s Network sign propped up on a ledge next to the EPA placard. The sign read:

“Another world is not only possible, she is on her way.” – Arundhati Roy 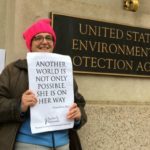 For me, it was a statement that we at Rachel’s Network will continue to be vigilant for the environment, keeping the legacy of Rachel Carson fresh in our minds. Now that the Trump administration has muzzled the EPA by halting hiring and grants, or even communicating with the outside world, it has never been more important to fight for our communities and planet.

The march made it clear that women’s issues are broad and interconnected. While ours was the only sign at the EPA, many signs carried by marchers expressed concern about climate change, clean water, children’s health, and other environmental causes. If there was a single theme to the day, it was that we must recognize and act upon our solidarity across the whole range of progressive issues that brought women together in DC and in towns and cities across our country.

This solidarity was evident not only in the spirit of the day, it was demonstrated by the kindness people showed to each other. Despite the overwhelming crowds, our fellow marchers were patient and friendly as they waited on the jammed Capitol South metro station platform to slowly exit the station. We celebrated each others’ innovative signs and slogans. As I struggled to climb down from a wall that blocked our progress, a fellow marcher appeared with, of all things, a stepladder! We were modeling the collaboration, compassion, and leadership that we see lacking in this new administration.

The enormous crowds made it difficult to keep our group together, but it was comforting knowing that my Rachel’s Network friends were somewhere out there in the crowd, fighting the good fight. It was a fitting metaphor for how the Network functions: as a supportive touchstone and gathering place where our individual and collective actions are bolstered.

I have never marched for anything before. The Women’s March could not have been a more wonderful way to start. But marching for women’s leadership and a healthy and thriving world is only the beginning. Now we have to harness all the energy, goodwill, solidarity, and camaraderie to continue to work together for change. We have come too far to let Rachel down now. 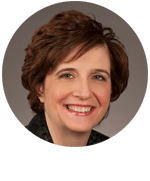 Kef Kasdin is Board Chair at Rachel’s Network. She also teaches the introductory “Foundations of Entrepreneurship” course at Princeton University and is President of Princeton AlumniCorps, an independent 501(c)3 organization which is committed to building civic leadership across generations.