Our country’s world-class public lands face many challenges, including an $11 billion maintenance backlog, climate change, and development pressures. When visiting Yosemite National Park in 2016, President Obama also observed that the beauty and benefits of our protected lands are not shared equally: “the national park system belongs to everybody. It is a true expression of our democracy, [yet] we’ve got kids all across this country who’ve never seen a park.”

Rachel’s Network wrestled with these issues, while taking in the beauty of the Sierras in the autumn, at our 2018 Fall Retreat in Yosemite National Park.

Guests began the conference in Berkeley, California with a guided tour of the David Brower Center with Executive Director Laurie Rich. The center, named for the founder of numerous important organizations including the League of Conservation Voters and Friends of the Earth, serves as the hub of the Bay-area environmental community. Laurie pointed out the building’s many sustainable features that earned it a LEED Platinum rating, including daylighting, natural ventilation, rainwater harvesting, and solar panels. Visitors also had the opportunity to visit the center’s current exhibit featuring photos of sharks by Brian Skerry.

On the bus ride to Yosemite the following day, guests shared information about the funding projects they’ve been working on and the issues they’re passionate about before watching selections from Ken Burns’ documentary, The National Parks: America’s Best Idea. Out the window, the landscape grew more wild and mountainous until Yosemite’s iconic valley came into view. For many, it was their first time seeing this awe-inspiring place in person. 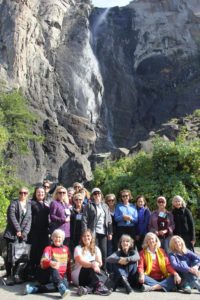 After a brief walk to Bridalveil Fall, one of the most impressive waterfalls in the Yosemite Valley, visitors met with Kristina Rylands, Yosemite Regional Director at NatureBridge and Park Ranger Shelton Johnson to get their bearings and enjoy Yosemite’s beautiful fall colors from a meadow near Yosemite Valley Lodge. “Welcome to the heart of creation,” Shelton declared before providing an overview of the history of the park and the park service. Shelton’s work to uncover and interpret the story of the Buffalo Soldiers has earned him many accolades and a prominent role in Ken Burns’ National Parks documentaries.

Yosemite National Park Superintendent Mike Reynolds, a man who grew up in Yosemite, welcomed guests that evening over dinner and described the park’s challenges including climate change, congestion, and funding shortfalls; and its promise as a beacon of democratic ideals. He also expressed positive changes like the reestablishment of an ancestral Native America village in the park, which was burned down following hundreds of years of indigenous displacement by European Americans.

“[This] can help bring that healing if our hearts and minds are open to it,” Reynolds said at a ceremony formalizing the reestablishment of the site in June.

The next morning, visitors travelled up Glacier Point Road, past blackened forests of dead trees following the summer’s destructive Ferguson Fire. There, they hiked to Sentinel Dome, Taft Point, or Glacier Point, summits with heart-stopping views of the valley from above.

After these invigorating hikes, the group travelled to NatureBridge’s brand new National Environmental Science Center to learn what advocates are doing to strengthen environmental education program in the US. President & CEO Phillip Kilbridge explained that children today spend very little time outdoors – only seven minutes on an average day – a reality that has troubling implications for conservation. “You will only protect what you know, love, and experience,” he said.

The one-of-a-kind net zero campus will serve as a fun and educational overnight camp for thousands of students of diverse backgrounds to get out in the wilderness and learn about ecology. Nicole Ardoin, associate professor at Stanford Graduate School of Education explained how places like the National Environmental Science Center are fostering not just a deeper understanding of science, but introspection, cooperation, and civic responsibility.

Later that night, Yosemite Chief of Fire and Aviation Management Kelly Martin provided context for the fire damage that visitors saw during the day. Kelly also spoke about her highly-publicized experience fighting sexual harassment in the NPS and what it’s like being a woman leader in a male-dominated field.

President Fern Shepard led a session the next morning on Rachel’s Network collective funding activities. She opened with a quote from our namesake Rachel Carson: “In nature, nothing exists alone,” because it so perfectly encapsulates the spirit of our network. She shared the many projects that members have and are currently funding and statistics on our growth and impact: a record number of collective funding efforts in 2018 (six), a tripling of member participation, grants that have increased 10-fold in four years, more media coverage of our work, and tangible outcomes contributing to a more sustainable world. 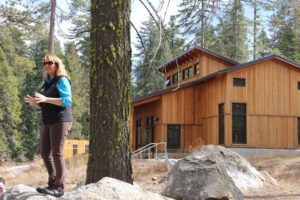 Mariposa Grove, the largest sequoia grove in the park with 500 mature giant trees, was the site of our afternoon excursion. Anne Kelly, director of the University of California Merced Field Stations in Yosemite and Sequoia-Kings Canyon National Parks joined the group to share her expertise on forest research and management. The grove recently re-opened after a three-year project to restore habitat for these majestic trees and limit visitor impact. A highlight of the hike was standing beneath the 1,800-year-old Grizzly Giant with its massive 100-foot circumference. On our bus ride back to the valley, tour guide and driver Collen Balch shared numerous facts and stories about the biodiversity of the park, and the life cycle of trees.

Sierra Club Board President and Rachel’s Network Member Loren Blackford closed our retreat by situating our trip in historical and political context. “Being here is a spiritual experience,” she said. “This place feels sacred. But it’s not just the big places like this that deserve protecting; it’s the smaller places too.” She emphasized the importance of getting involved in politics, making the environmental movement more inclusive, and tackling the biggest threat to conservation of all: climate change. “If you want to make America great again, protect people, protect places,” she concluded.

NatureBridge Educator Jenn Peach closed our program with a contemplative candle-pass ceremony allowing guests to reflect on their time with each other in the park. “Transformative,” “Grateful,” “Community,” “Conviction,” and “Inspriring” were some of the words they shared. Shelton Johnson had stressed that love was the foundation of the protection and preservation of our communities and planet. This feeling was alive and well, and something members will carry with them into their work ahead.